(This blog entry was translated from www.poc39.com/archives/1321, originally written in Japanese, by the author.)

Here is an investigation report by a crazy source-seeker, about a photo featured in a Japanese TV program, the 10th IPPON Grand Prix.

The show gives who wins a “oogiri master”, by competing on how funny you can answer to “oda-i” questions.

“Say something with a photo” roulette

The program had a part named “Shashin-de-hitokoto” roulette, which means “Say something with a photo.” It was like this:

To push the button, one photo of formerly selected 12 comes up randomly from the “roulette” and a participant gives it a shot to say something funny with the photo.

I suppose probably there was questions with photos in the program or another so far, but the “Roulette” style, answering by each, was totally new.

Every featuring photo was very impressive.

But the photo that mostly had taken my attention was the one of 12 that were featured in the B block.

Although it’s not the very same one, I found a photo online seemingly shot at the same moment:

* The photo in the program was credited “REUTERS/AFLO.”

Who is it? Hillary Clinton

I recognized who was it right away: Ms. Hillary Clinton. I can’t explain why I can tell, I can only answer “I’ve ever seen her.”

Why such a funny face?

Seemingly the photo was not taken by paparazzi, sniffing around for celebrities’ privacy.

And I wondered why she had to make such a funny face before cameras.

To find it out, I started to investigate when and where the photo was taken.

Looking for when and where got stuck soon with the funny face of Hillary. Supposedly no web pages featuring the photo shot the same moment gave any information on sources. And that made sense.

Looking for a not-funny in the same outfit

So I changed the searching strategy to look for a not-funny face of Hillary Clinton in the same outfit, her navy-blue suit.

First I made searches in Google images and YouTube but got little. Too many Clintons in different outfits were coming up to find the one I was looking for.

Then I tried to focus on things in search.

Since the photo quoted above had a URL containing “2012”, I supposed that was shot in 2012. If this is true, Ms. Clinton was the Secretary of State that year.

When I added keywords that seemed to have to do with in search, I can find this movie:

Secretary Clinton Delivers a Video Message to the Fulbright Scholars

Although the outfit of Secretary Clinton looks very similar to the one in the photo, her hairstyle is clearly different. She is not tying her hair.

But I felt I was coming closely.

And I’ve found it!

And when I searched the movie archives in state.gov, I found it. Here is it:

The outfit of Secretary Clinton is perfectly the same. That’s it.

Answer: on April 10, 2012, with Japanese foreign minister Koichiro Gemba, at the U.S. department of state

The answer to “When and where the photo of Ms. Hillary Clinton with a funny face?” is

On April 10, 2012 press session with Japanese foreign minister Koichiro Gemba(at that time), at the Treaty room of the U.S. Department of State, Washington D.C.

cf: A news report in Japan 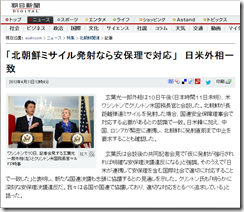 Backgrounds to the funny face

And by watching the video, the reason why Secretary Clinton made a funny face was also found out.

The session was going bi-lingual, as to both remarks and Q&As. Secretary Clinton speaks in English, while Minister Gemba speaks in Japanese. And then the interpreters speak while making into the other.

The situation has made her funny face.

The moment comes when Secretary Clinton was waiting for finishing the interpreter in Japanese, after she had answered to the question from a CNN journalist. Her answer was like this:

Thank you very much. Let me make absolutely clear that any launch by North Korea would be a serious, clear violation of their obligations under already existing UN Security Council resolutions 1718 and 1874.

The face came from “Isn’t it long?”

Secretary Clinton spoke so clearly and slowly that she made it in about 25 seconds (according to the time in the video).

And the interpreter started to speak her statement into Japanese, but he (probably it was male) made it in as many as 75 seconds  even though he didn’t speak so slowly.

But it is not accurate that the interpreter spoke her statement at all. To tell the truth, he interpreted the question from the CNN journalist into Japanese in advance to her answer.

And the Secretary of State was starting to show the face saying “Isn’t it long, is it?” while waiting for the interpreter to finish. I think the faces and expressions she made that time was also funny, you should watch the video if you got interested.

When nearly 1 minute passed and the interpreter paused a while she was about to speak again. But the statement into Japanese had not been finished yet.

This is why and how that funny face has been made.

Although the faces showing “Isn’t it long?” of Ms. Clinton is also funny, but the photo was getting the best and the most valuable expression, I think.

I should say Good Job for photo staff not to miss the best moment.

Naoki Koidemizu, member of the comedy duo Shampoo hat, who had got the photo in the roulette, answered this way:

He didn’t only get IPPON(full votes) but even any vote at all.

Albeit not as an oogiri answer, to try to give it an another on the basis of the investigation,

could be just an example.