I found that Microsoft had made "The New Surface/Windows" CMs, beginning with "Honestly," in at least 7 languages. 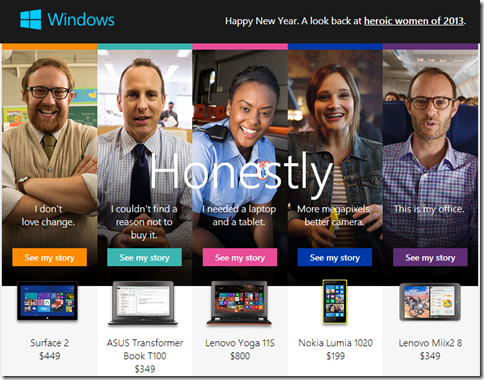 Now let’s see various teachers and lecturers speaking in their own language.

*The date the video was published will be described as mm/dd/yyyy.

But why is the title written in English? Why is Microsoft Deutschland not using their own language here? –It could be suspected that WW2 has not ever ended whatsoever. (><)

Through a comment to another blog post of mine, someone let me know what he was speaking was not Mandarin Chinese but Cantonese, mainly spoken in southern China. I can’t tell them yet, of course.

most hateful in Japan?

Lots of Japanese people really hate "The New Windows" CMs including this version. They say something is irritating and makes them bad-tempered with no apparent reason. These CMs may be the ones of the most hateful in Japan.

I think the reason is because Microsoft has failed to localize enough to be acceptable for them. It could be pointed the fact that the studio set used in the Chinese and the Japanese version was the same. According to an actress Hono Miyabe, not the woman up there but, who appeared as a trainee doctor in the Japanese version, the CM was shot in Taiwan with all staff there, such as sets, extras and so on.

Facts like this could fail to make the Japanese feel like being "Japan," and the people including myself can’t be familiar with those CMs.

If you have some fun from this post, watching to compare the videos in #1 #2 #3 would be also funny. Being written in Japanese will not matter.

Thank you all for reading.